Homebrewing with a S.T.E.A.M. twist!

… Into the mash. Presenting the Blood Bag Pale Ale #1

In an impromptu collaboration with Rafael Rios at Rios Family Farm, we decided to explore the world of alternate sugar sources. The fruits of this experience is an admittedly mediocre beer with an amazing color.

Now, you might be aware that most table sugar comes from the venerable sugar beet. It is true that dissolving a few pounds of granulated sugar into some water and sprinkling some bread yeast on to will get you alcohol, we were shooting for something with a little more finesse. We wanted to see if red beet roots could provide color and sugar, without adding much in the way of flavor.

Happily, we were able to find some prior experiences documented out on the Internet: a series of images on imgur and a short conversation on hombrewtalk. With these as rough guides, we were ready to start our oddly colored journey from root veg to beer. Would that make this a Root (Veg) Beer?

The idea of using beet root as a sugar source came from came from studying the chemical intricacies of the mashing process.

When a brewer, home or otherwise, performs a mash, they are setting up a chemical process involving certain enzymes in the grain. Those enzymes are present in our brewing grain because it is malted, which is a process of starting seed germination and then abruptly stopping the process and drying the grain.

When the grains germinate, they produce enzymes to break down the kernel’s starch stores into sugar, which the plant uses to build it’s initial root and leaf. Malting makes sure that the starches are still stored within the grain, but the enzymes are ready to go.

Those enzymes are reactivated by moisture and temperature, which is quite convenient for a brewer trying to get sugar out of grains.

You might find this train of exposition to be besides the point when it comes to beet beer, but the crucial thing to know is that barley can have an excess of enzymes. If the grain has more enzymes than starch to convert, then there are enzymes a plenty to do our bidding.

The amount of enzymes in a grain is measured as diastatic power in degrees lintner (°L) and grains that contain enough to totally self convert need a diastatic power of 35°L. Any thing over that is fair game for use outside the source grain. Given the diastatic power of a grain, a little bit of math will tell you how much non-enzymatic sugar sources can be added to the mash for conversion. In our case, using 3 pounds of 6 row pale, we were able to add in a pound of beet roots.

The we used the tried and true Mary Izett Speed Brewing mash method. The process was slightly modified for the beets. We do not know what temperature effects would be brought on by mashing in with the beets. Instead, we placed the beets in the mash water while it was heating. Once we reached our strike temperature, we had no worries about the beet temperature, and everything proceeded as normal.

By the way, “normal” is a flexible term in this household.

The hop load was a little stronger than we normally go for, with a half ounce of Magnum at the start in a 2.5 gallon batch. Aroma hops were 0.5 ounce of Cascade and Tettnang at 5 minutes. The end product lacked much in the way of hop aroma, and the bitterness wasn’t on point. We pitched some US-05 on it and let it rock out, as is the normal, for 2 weeks. It was then kegged and force carbed.

As a beer, this recipe didn’t have much going for it. Little aroma, medicinal taste on the back of the tongue, lackadaisical head retention, terrible clarity…

But the color is amazing! And that is what we were shooting for. We also gained a piece of valuable information. Thanks to the Total Points Method (TPM) for calculating gravity, we were able to determine that the beet roots would provide 1.059 points per pound per gallon, at an assumed 70% brewhouse efficiency. That’s better than most grains!

So, was it a good beer? Not really. Was it drinkable? Sure.

Was it a great experiment? Absolutely.

Will we be doing it again? You bet. Soon as we can. There are too many possibilities to explore, we can’t leave this at 2.5 gallons of meh!

An alternative sugar source beer styled as a pale ale.  We used peeled and chopped beet root in the mash in conjunction with 3 pounds of 6 row pale ale.  Thanks to Rios Family Farm in Little Flock for providing the beets for this experiment! 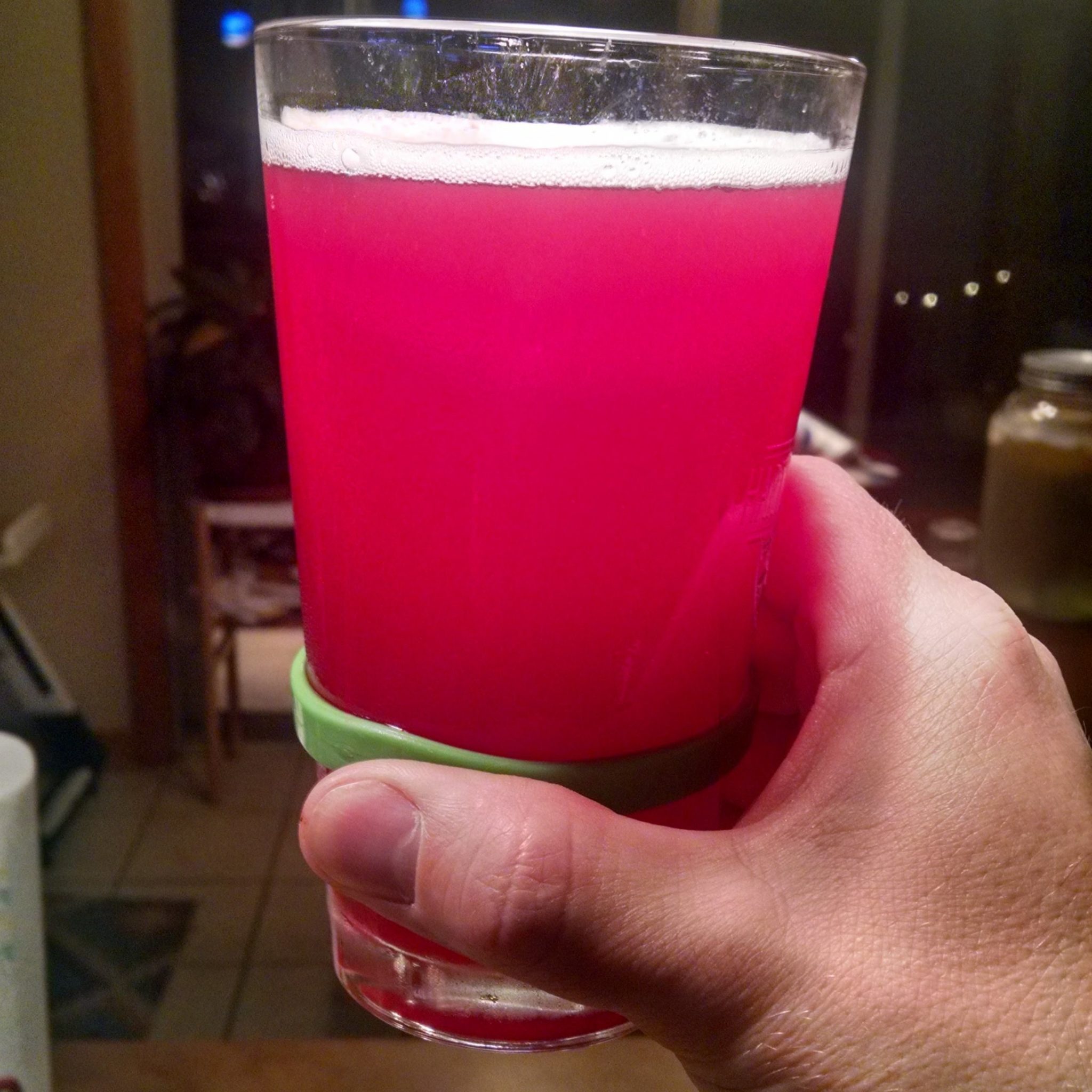